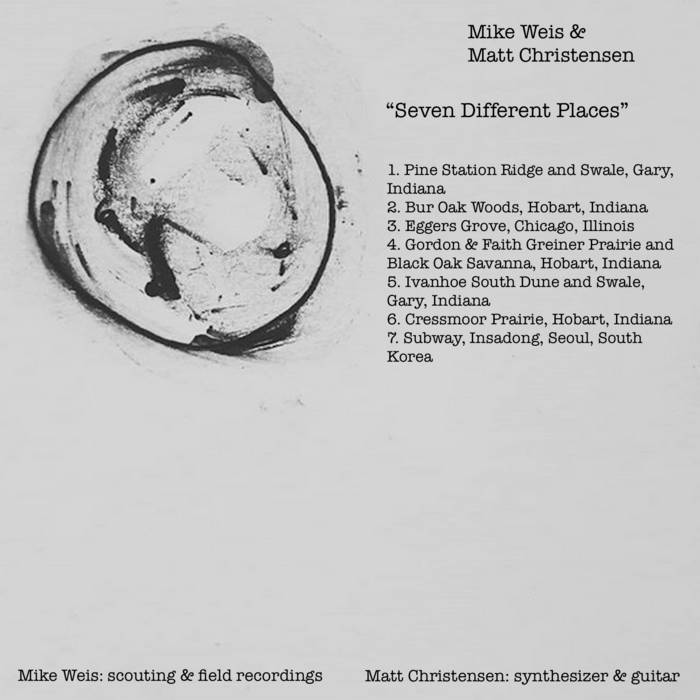 The first six "places" contain field-recordings that I collected in nature preserves from along the south-western rim of Lake Michigan, from southeast Chicago to northwest Indiana, an area collectively known as the Calumet Region. If you've ever driven through this part of the American Midwest via the I-90 “Skyway” I'm sure your first impression would not be of a thriving nature community of bio-diversity but more likely you would notice a landscape scoured to the bone by 20th century industrialism. But hidden amid these bleak views of smokestacks, noxious tank farms, pyramid-shaped mounds of petroleum coke (a by-product of oil refinery) and slag (a by-product of the steel industry), and burned-out abandoned houses, is the incredibly rich biodiversity of the mostly incongruous natural lands of the Calumet Region.
The wilderness of this region is subtle and inconspicuous, hiding out next to a chemical plant or wedged between sets of converging rail tracks. And yet, this unlikely place supports a variety of life like no other land in the country. The National Park Service determined that the Indiana Dunes National Lakeshore (now a National Park!) “ranks third of all U.S. National Parks in plant diversity, even though its acreage totals less than 3% of either of the top two (Great Smoky Mountains and Grand Canyon).” Many biologists regard the region as one of the richest collection of rare and special plant, animal, and other organisms in the country. This is the location where Dr. Henry Cowles, from the University of Chicago, defined modern ecology science in 1898 with his innovative study of plant succession.
In 2014 I began a photography and sound project that focuses on the natural lands of this region. This project is my look at the rare Calumet ecosystems that were devastated by 20th century industrial expansion and its successive decline and the community that enjoyed the short-lived fruits only to suffer hardship a few decades later. I have spent the past few years photographing the high-quality nature preserves that were spared destruction or that have been rehabilitated by way of a new wave of restoration efforts.
In addition to photographing these rare ecosystems I also collect field recordings of the preserves throughout the year. I record the sounds with a portable digital recorder placed in various locations inside the nature preserve – two on the periphery of the property and two to three in the center of the preserve, the location furthest away from the boundary lines. I want to examine how the sounds of nature and the sounds of man/industry interact and intersect in this part of the country where heavy industry and nature interconnect and collide. These recordings are then layered and mixed down and combined to form one track per preserve.
I gave a selection of these recordings to Matt for this album and he synthesized them beautifully. At times I struggle to tell the difference between the field-recordings and his contributions. Elsewhere on the tracks he supports the ambient sounds with beautiful melodies that transcend them beyond their respective domain. One shocking revelation to me upon hearing these finished tracks was how Matt's transformation of them bears an uncanny resemblance to the sounds in Adrei Tarkovsky's classic film, Stalker. This is peculiar because there have been many times when I've felt like The Stalker when secretly hopping a fence to explore a non-public access preserve, like I was entering “The Zone.” My straightforward sound documentations have been carried beyond the heavy weight of history yet not distorted beyond recognition so the story doesn't get told. As for the last short track with a field recording Korea, that one is a bit of an enigma. On first listen I immediately thought we should edit it out as it seemingly bears no connection to the other six tracks. However, following multiple listens to the album I suspected Matt's intention was for it to remain there as it subtly connects the dots but we'll leave that interpretation for the listener to digest.

All sales from this download will be donated to the Shirley Heinze Land Trust, a non-profit organization that purchases land to restore and preserve. Five of these "places" are Shirley Heinze properties. For more information, visit www.heinzetrust.org

Thanks for reading, thanks for listening,
Mike Weis

Bandcamp Daily  your guide to the world of Bandcamp

Featuring Gary Bartz, 5 years of Rhythm Section Intl and an LP of the week by Nicolas Jaar